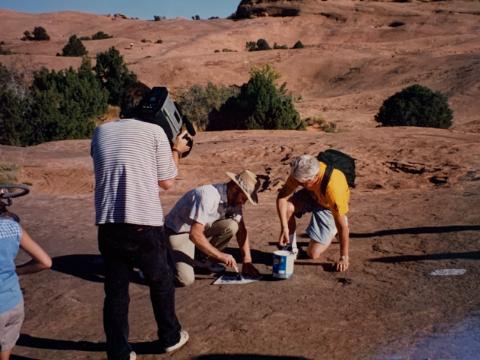 Your weekly column, “The Way Sam Remembers It” brings back some memories of my own.

That day in 1967, for example, when I walked into the Times-Independent and met you and your dad for the first time. You had recently taken over as publisher and editor following your dad's 40-plus-years career heading the newspaper.

I had, in my hand, a proposal for a weekly column, and some photos based on my personal adventures on the rugged trails of Southeast Utah. You and your dad liked the idea and accepted my first article. Working for you, Sam, launched me into my journalism career.

Week after week I traced and featured in the paper the area's four-wheel-drive trails, including almost invisible, abandoned, and forgotten uranium trails. I logged these local adventures in milepost format, and included maps I drew for your readers orientation. These outdoor articles and maps were the beginning of columns you still publish occasionally from other local adventurers.

Over the next several years and into the early '70s, as a part-time, contract journalist, you introduced me to every aspect of publishing a weekly newspaper, from reporting the news, making advertising sales, layout and design, to developing the film and making prints in your dark room.

Later, following my final year as an elementary school teacher, you provided me full-time work, continuing as a contract journalist. I recently came across some of my pay stubs from you, with my pay determined on the length of stories and number of my published photos in the weekly paper.  At one point I was surprised to find in the Times that you had named me your "Outdoor Editor."

You continued to give me more assignments on issues involving the city and surrounding counties, and you nurtured me in the daily tasks of producing the newspaper. I covered business and industrial news. I became the Times-Independent representative for the Chamber of Commerce and other groups, at your request, such as the Rodeo Committee, and continued my outdoor columns and news about the nearby national parks and monuments.

It was there also in Moab that I made my mark(s) on the world, marks that endure to this day, in the form of the Moab Slickrock Bike Trail. And here are some never-before-published details of how it came to be.

It could be said, and as the founder of the Slickrock Trail, I will say it, that among the roots of the trail was the influence Sam Taylor had on my two wheels.

The way Sam sent me out on assignments acquainted me with local leaders who were movers and shakers of this small town. Interviewing them resulted not only in newspaper coverage, but also friendship as fellow adventurers in the very unique environment of canyon country.

In my outdoor news coverage of the Bureau of Land Management, for example, I had developed a business and community relationship with Doug Wood, at that time the BLM manager of the Moab office. I remember riding with Doug Wood for the feature article I did on the BLM's jurisdiction over the Basque sheepherders grazing their animals in the isolated valleys north of the Arches.

And in another column I featured some unusual creatures I found in the slickrock puddles above Moab. This required an over-the-slickrock trip with Doug Wood and Bill Taylor of the National Park Service to get their analysis of a desert form of shrimp which emerged only in wet weather.  From that experience came the naming of Shrimp Rock, now a feature of the Slickrock Trail.

So it was in 1969 that Doug Wood, with the approval and blessing of BLM officials in Monticello, Salt Lake City, and even Washington, D.C.,  began the official creation of the trail I had proposed to them, a 12-mile loop for motorized trail bikes on the red sandstone ridges above Moab.

And this occurred despite an earlier rejection, that I've never written about before, as attested by a letter I still have in my possession. A  Montana National Forest official turned down my proposal for a marked trail for trail bikes through the woods to a ghost town some miles into the interior of the state. That proposal was certainly no match to the slickrock trail that came to be at Moab.

After discussions with Wood and I, the BLM officially named it the Moab Slickrock Bike Trail and published its first brochure about the trail, with my picture on the cover, in time for the dedication on July 22, 1969. The creation of the trail was almost a recreational first for the BLM and it received international coverage. Next year will be it's 40th anniversary.

At first I biked alone in the Moab country and it was the love of slickrock that brought my wife Alberta and me, newly married, to the town. It was in Moab where my two daughters were born, and it was here a few days ago I returned with my youngest, my 39-year-old Tonya, for a very memorable ride on the Slickrock Trail.

The roots of the Slickrock Bike Trail had other connections with the work I did for Sam Taylor, including providing a living for me and my family in a town at the brink of the uranium bust, but that would require a longer story.

One of Sam's neighbors, 19-year-old Dan Dunn, was working on his father's uranium trucks one day in the 1960s. He remembers the day I came to him and said, "I think I have found an all-slickrock loop off the Sand Flats Road that you would enjoy riding." Dunn, who is now a physician living in New Mexico, went with me on his dirt bike (or more appropriately "rock bike"), as did several others over the next year, making up the original riders of the slickrock.

Among these bikers were his younger brother, Russell Dunn, a student of mine at the time in the little school where I taught the year before I took on full-time newspaper work at the Times-Independent.

Russell remembers "the day you saved my life," he said. It was on one of the ridges I named "Never Come Back Trail," where his motorcycle reared up wildly on an uprising dome of rock at the edge of the Colorado River. With him standing on his tip toes and his hands still on the handlebars holding his bike from going over his head and into the gorge below, I parked my bike and ran up the slope to keep him and his motorcycle from flipping over backwards. (The "Never Come Back Trail" was omitted from the BLM maps because of its degree of danger).

My Times-Independent coverage on Tex McClatchey's jet boat business in the Colorado River canyons gained me a friend who rode with me frequently, a who gave a good testing of the slopes and curves that went into the making of the Slickrock Trail. McClatchey and his employee, Fred Radcliffe, both now deceased, mastered the sport of riding the slickrock with me. I remember them both as comedians on many slickrock adventures. Their laughter continues to echo in the chambers of my mind.

The time came when I authored, and Sam published, the first two Moab area guide books entitled: "This is Canyon Country" (1968), and "Rough Trails in Canyon Country," (1970). Both guidebooks, published by the Times-Independent, were compilations of my outdoor columns Sam had published through those years. These two guidebooks preceded the proliferation of tourism guides by local as well as out-of-area publishers that followed, eventually expanding into the mini-industry it has become today.

My work experience with Sam at the Times-Independent inspired me to complete my journalism degree in Tennessee. This then catapulted me to my next newspaper post at the Sante Fe New Mexican as the newspaper's first special sections editor. Similar work followed at the Santa Barbara News-Press for another decade and then capping my career with a worldwide computer research organization.

Nearly 30 years later, in 1998, I returned to visit Moab, and was hosted by Russ Von Koch, recreation specialist of the local BLM office, and his staff. In the years I had been away, the mountain bike had been invented, and world-wide publicity about the Slickrock Trail had appeared in  magazines and worldwide media, attracting more than 100,000 riders annually.

Von Koch introduced me to the Sand Flats Recreation Area -- a county and BLM project based on the popularity of the trail, which in turn, it was said, was partly responsible for saving Moab from ghost town status following the decline of the uranium industry. I was also surprised to hear that the rapid rise of the mountain bike was partly attributed to the publicity about the Slickrock Bike Trail. The rolling sandstone ridges I loved to roam on two wheels above Moab thus became the impetus for the new industry. an attraction that continues today filling up Moab's restaurants and motels with biking enthusiasts.

As I personally witnessed in a recent birthday ride on the slickrock,
the vast number of bike riders has left black tire marks on the Moab rocks to the extent that bikers can follow most sections of the the trail without the help of the painted dots. And furthermore, as I often do from my California home, the population of the world can follow the Slickrock Trail from satellite cameras above the earth that anyone can observe on their personal computers, thanks to Google. And doubly so can you see the blackened rubber tire marks on the Hell's Revenge Trail that now criss-crosses the bike trail and is receiving increased motorized traffic.

Through the past 40 years I have never forgotten my brief association with Sam Taylor and the Times-Independent. The phenomenal contributions he has made for local and state government, for improved access to Southeast Utah national and state parks, and other significant achievements are too extensive to list here.

From my perspective I see Sam Taylor as a guiding and gifted leader in a small community - the media head of a scenic kingdom in an isolated island of wild beauty that he has promoted for more than five decades. I was as thrilled to visit him and his wife a few days ago in his home as I was to visit him and his dad in the Time-Independent office 40 years ago.

So this personal view point from the founder of the Slickrock Trail  reflects on one more contribution that Sam Taylor has made as a small town newspaper editor, an impact that he and others in the community may have overlooked.

It is about the impact he made on me, in providing the media and support for my love of exploring on two wheels some of the world's richest, most concentrated mazes of bald sandstone ridges, as found around Moab. ​
Photos by Rich Walsh, October 2018 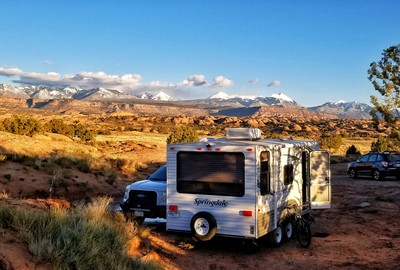 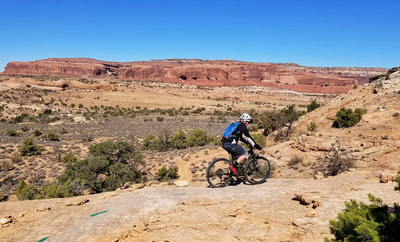 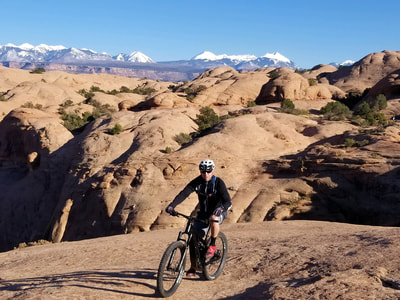 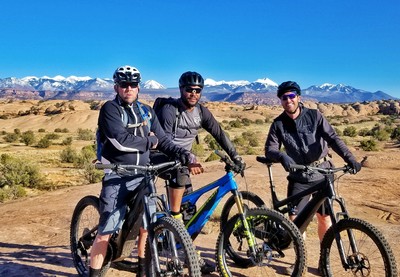